In my quest to sample as many wines as possible I will even pay $8 for a co-op made wine served in a plastic cup onboard a United airlines flight. They used to serve a decent NV wine called Fox Grove.
This French version is not quite as decent but was certainly serviceable. I tried to research this one a little more and only came up with the fact that it’s a co-operative wine from the Luberon and Ventoux regions of France (south east from Chateauneuf du-Pape ). I’m guessing a Syrah blend with perhaps some Carignan. A basic wine that offered immediate pleasure without complexity or airs. It does what it’s supposed to do, drink easily and fade away quickly. Mainly blue fruits on the nose and palate, very little tannins but some good acidic juiciness. It’s really hard to pick out nuances in a plastic cup in a pressurized airplane, so I will leave at that. This is perhaps an $8 bottle that won’t embarrass you at a party. 84 points and 3 stars. Salut…. 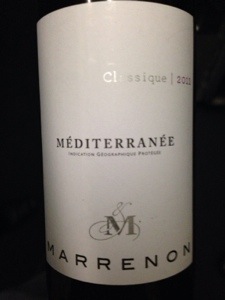