Much has been written about decanting a wine.  The often misguided advice of aged wines needing decanting are incorrect.  In fact, I find that decanting old wines reduces whatever freshness they may still have and reduces their intensity.  Having said that, there may be a need to decant an older bottle if there is a great deal of sediment.  I only do this if there is a chance that the wine will be ruined by deposits in the bottom of the bottle or if I smell the wine and it has a bad aroma.  Often times it is a release of gases that would otherwise spoil the drinking experience.

When decanting an old wine for the purposes of sediment avoidance, I use a candle under and behind the neck of the bottle so that I can see the sediment start to pour into the decanter, that is when I stop pouring.

When it comes to young wines, this is where I often deploy either my Vinturi, or my double decanter.  What are these gadgets you ask…  The Vinturi is a device that uses Bernoulli’s principle, much like a carburetor to mix a great deal of air to the wine as it is poured through the device.  If you look closely at the side of it you will see two holes on opposing sides that allow the air to enter the unit and mix with the wine, giving it a large dose of aerating and helping to soften the wine and tame the tannins.

To double decant means you first decant the wine into a vessel, then return it to the bottle, both procedures adding air to the wine.  My unit was designed to greatly aerate by virtue of the way the wine flows into it whereby a large amount of surface area is made available for the wine to come into contact with air.  Once it is decanted, simply turn the unit upside down for it to decant back into the bottle. 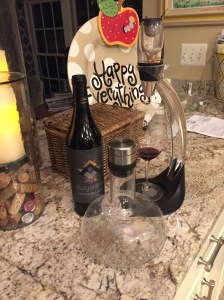 I double decanted the rather tannic Bulgariana wine that I previously wrote about and to my amazement the wine took on a whole new persona.  I was faced with a subdued nose as I was cooking onions in the kitchen that overpowered anything I could coax from the glass but the palate was alive and kicking.  Beautiful black currant hints with much subdued tannins were the tertiary flavors after I got a tremendous coffee profile on my initial taste.  On the mid palate, Nutmeg.  This wine ceases to amaze me and is a whole different beast when really well aerated.  I recommended it to a friend who normally drinks Pinot, he did not like the dryness and full bodied nature of this beast, each to his own I guess.  If you are into this style, you can’t go wrong for under $10.

My advice is to experiment with decanting, try out a Vinturi and have some fun.  (I have even heard of people using a blender to aerate their harsh and tannic reds!).  DO you decant and if so, old or new wines or both?  Salut….