This Sonoma gem pours very dark, brooding and inky in the glass.  The palate is somewhat of a surprise- it’s chock full of plum, black berry and chocolate powder.  I also get a whiff of the 14.5% alcohol.  On the palate it is delicious, tannic, and interesting.  Black iodine, plum jam and blackberry compote all hit me.  The wine has a nice dose of tannins that carry through all the way to the finish, not overly dry but present nonetheless.  The mid palate mellows out some from the big burst of fruity goodness.  The tannins are more evident on the gums at this stage and my mouth is starting to pucker.  The finish has dusty mocha, more of that Iodine and obviously those dark fruits.  It could use a touch more acidity but I really am enjoying it for it’s youthful exuberance and unabashed tannic structure. Good use of oak adds to the flavor of this wine and the alcohol that I was concerned about did not materialize.  It will cellar nicely for a few years and pair well with grilled steaks, Osso Bucco or a hearty Venison stew.  Drink till 2026.  91 points my friends and 5 stars for this $20 Cali Cab.  Salut…. 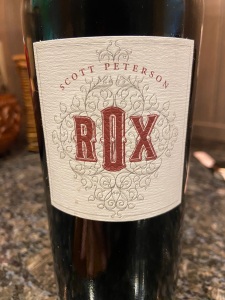 Dark purple, opaque.  The nose is chock full of blackcurrants, spicy oak and some dusty tobacco.  The palate is stark- dark and brooding with blackcurrants, oolong tea, nice gentle tannins and a touch of acidity.  The midpalate is a bit edgy with some oak influence, charred wood, dark fruit and an increasing dryness from the tannins that are ramping up.  The finish is really enjoyable- a nice dry mouthfeel, decent acidity and gobs of fruit.  The blackcurrants are really delicious.  This is a yummy wine for everyday that will cellar nicely for a few years and be a hit whether you are serving steaks or pizza.  Drink till 2025.  90 points and 5 stars for this $20 effort.  Ps.  The label is one of coolest out there.  Salut…. 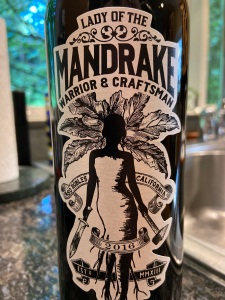 The nose on the third wine of our virtual tasting was wild.  Gamy AF, with loads of mushroom, forest floor, bacon fat and some semblance of black fruits.  On the palate it was much more manageable and in line with expectations.  Bramble, blackberry reduction, leather and some really nice tannins all came together on the palate.  The wine smoothed out some on the mid palate and it showed some nice balance between the fruit, the tertiary flavors, tannins and acidity.  The funk wore off but there were trace elements of morel mushrooms, leather and blackberry.  The finish was where this wine finally came on pointe.  Good fruit presentation, some nice touches of those secondary flavors and a decent amount of astringency from the lithe tannins.  Overall I really enjoyed this wine, but the nose was offputting for many on the tasting.  91 points for me.  Drink till 2026, but let it breathe for at least an hour to help dispel the funk.  For $20, it gets 5 stars.  Salut…. 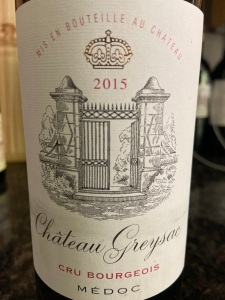 This was the first wine of my Second Lockdown Virtual Tasting.  It was the only white in the lineup, so it had to be a Chardonnay from California.  I instructed everyone to chill half the bottle and reserve the other half at room temperature.  We were going to do an experiment.

The wine is a nice golden color in the glass.  The nose of the chilled wine had pear, apple and citrus notes.  On the palate it followed the theme with some nice acidity.  The finish was decent in length and showed off that Apple/pear combo nicely.  I had researched whether this wine had undergone Malolactic fermentation but could not find proof from any literature, except to assume it had as the winery mentioned one other Chard in their portfolio that specifically did not go through Malo.  The wine was quite sharp and lacked the telltale butter notes of the secondary fermentation, I’m baffled.

Anyways- we then tried the same wine at room temp.  Huge differences with flavors and mouthfeel.  The experiment worked, the point being that most pros taste whites at room temperature and we needed to see the differences.  Besides the fuller body it included less citrus, more pear and apple, alongside a touch of baking spices.  The wine drank beautifully for me and I gave it 91 points.  I would pair it with summer salad, prawn cocktail or blackened Salmon and drink till 2026.  $20 gets it 5 stars.  Salut…. 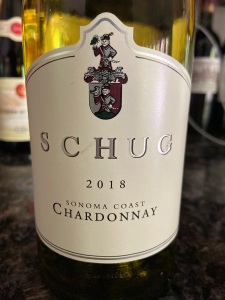 Very rich purple in the glass and semi opaque.  The nose gives off cherry, baking spices, bakers yeast and red currants.  On the palate it is very drinkable, smooth and fruity.  Raspberries, red currants and those spices hit the palate.  As the wine rolls over the mid palate I get a sour rhubarb note that gives the wine some zing.  Very fine grained tannins appear on the finish to leave a rather pleasant mouthfeel.  This light to medium bodied wine calls for white pasta dishes, roast chicken or Prosciutto wrapped Asparagus.  It gets 90 points from me and I would drink till 2024.  For $20, it’s a good deal on Super Tuscan juice.  4 stars.  Salut…. 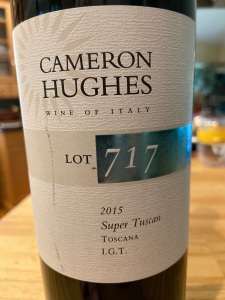 I have had many bottles of the Marques De Riscal, of whom a friend’s father was on the Board many moons ago.  I think of my visit to Spain every time I see the twisted wire around bottles of this Tempranillo.

In the glass it is a reddish shade, pretty opaque and showing off wide legs down the edges.  The nose is gorgeous- tar, black plum, earthy spice and bramble.  On the palate it is rich, unctuous and very fruit forward with blackberry jam, plum reduction, spice box and cedar.  It is delicious.  There is a very nice acidic component that carries me to the maid palate where those classic Rioja flavors of creosote come to the forefront.  There is a spiciness on the back end that I really enjoy.  The back end is long, with a crescendo of tannins peaking at the tail end.  It’s a really nice, dry yet tart finish with some definite wood influence.  The mouthfeel begs for the Strip Roast I am cooking on the smoker.  This wine is drinking beautifully and will cellar well till 2027.  92 points and 5 stars for this $20 stunner.  Salut…. 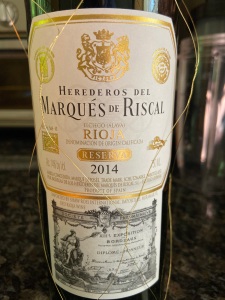 This wine is 13 years old and I just found it in my cellar. The cork did not look good and I feared for the worst.  In the glass it’s very dark, almost fully opaque but it shows nice legs.  The nose is mature- earthy, with mushrooms, forest floor, game and a hint of black cherry reduction.  On the palate this is stunning- fully developed with a boatload of tertiary flavors.  Umami, dried shiitake, garigue and stewed cherry.  This wine is at peak.  The midpalate is super smooth- rich fruitcake, secondary flavors and a lithe dose of acidity.  The tannins are fully melded and give me a great mouthfeel.  The finish is lovely if somewhat curt.  Rich fruit reduction, trace tannins and those delicious secondary players we hope for after extended cellaring.  20 plus seconds. I love this wine and am stoked it turned out so nicely.  Drink till 2022.  93 points.  I paid under $20 back into the day, I doubt you can find any of this 5 star wine these days.  Salut…. 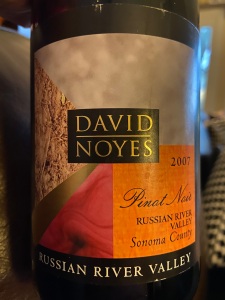 Typical for Pinot- this wine is reddish in color and see through. On the nose it’s very fruity, strawberry and cherry.  On the palate is has a sour cherry note as well as cola.  The sourness is refreshing and accentuates the cherry theme.  The mid palate is much the same and the finish gets a crescendo of the sour cherry component.  It’s a bit gritty though, and my teeth are a little tinged.  It’s a nice length that tapers off.  I’m enjoying this wine and would pair it with roast Duck, perhaps a pasta casserole.  I’m going 89 points on this $20 Pinot.  3 stars- drink till 2027.  Salut…. 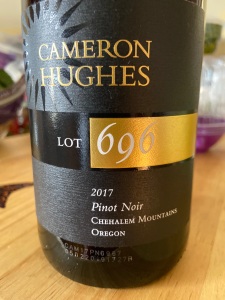 It’s black in the glass and totally opaque.  The nose has hints of raisin, black cherry reduction, hoisin.  The palate is thick, a touch acidic and bursting with fig, plums, black cherries again as well as fruitcake.  The midpalate introduces some very fine grained tannins alongside the fruit medley.  There’s a nuttiness that hits towards the back end alongside blackberry jam.  This wine is very appealing. Rich and balanced.  The finish is long with that dark fruit core continuing for over 30 seconds.  I love Ripasso’s and am excited by this one.  92 points. For $20 this is a 5 star wine folks! Salut…. 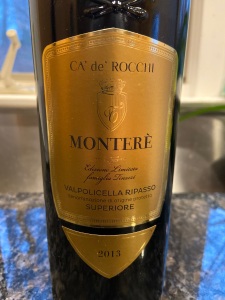 Very dark bluish purple in the glass with very fine legs, indicative of the 12.5% alcohol.  On the nose it is purple fruit, blackberry, damson and cinnamon.  The palate is surprisingly fresh, I was expecting a more traditional attack.  This one pops with plums, black cherry and lithe tannins.  The mid palate gives me cola, black cherry and some strawberry jam.  Strange, I know.  The finale is really a nice, smooth, fruity affair with really well tamed tannins holding the blackberry and cola flavors on for a good 30 seconds.  There is a trace of acidic bite, but it is appropriate and balances the nice tannins.  This is a tasty, decent wine that gets 91 points from me.  I would drink right away until 2024 with lighter meat dishes, perhaps beer-can chicken or even roast duck breast.  Strangely enough the Decanter score of 95 was opposite to the mid 80’s score given by others.  I think this is a steal at $20 and it gets 5 stars from me.  Salut…. 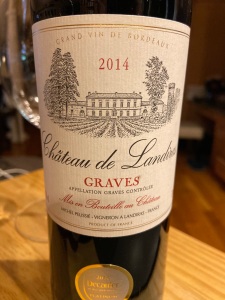 a reason for wine